Another look at suiting

I think many apparel sewists (including me until recently), tend to overlook suiting fabric because we’re not actually making a suit.  But suiting fabric can be so much more!

As my projects have started to branch out, I find myself frequently looking for fabrics that (1) have the weight and opacity of bottomweights, (2) have more drape and fluidity than your typical twill or denim, (3) come in a variety of solid colors, and (4) are easy to work with and don’t require frequent washing.

It turns out that suiting checks all those boxes!

Let’s take these shorts I made from the Luna Loungewear (affiliate link) set (pattern by Love Notions).  This pattern is designed to be pajamas, and they make greeeaat pajamas!  But I wanted a pair of casual easy-to-wear shorts for my upcoming trip to Barcelona (eeeee!!!!) that looked somewhat dressy and wouldn’t scream tourist.

I knew I wanted a dark, flowy bottomweight fabric.  I considered rayon challis, which would have plenty of drape and be relatively dressy.  Ultimately I decided against it because I wanted something a little sturdier than challis that wouldn’t have challis’ tendency to stretch with wear and handling.

I briefly considered cotton bottomweights like twill , but those tends to have very little drape and I wanted these shorts to have some movement.  Shirtings were another possibility, but again I wanted something a little thicker so I didn’t have to worry on days I wore patterned underwear.

Ultimately I decided on this black textured poly/rayon suiting from Cali Fabrics.  (Note: I seriously considered using this 100% rayon crepe suiting for these shorts.  I made a pair of harem pants with this fabric and loved it so much that I went back and bought 4 more yards!  There’s still over 90 yards left, but be sure to leave more for me 🙂 )

The suiting was perfect for these shorts!  It’s easy to work with and wear, and has exactly the weight and drape that I wanted.  They’re really comfortable and flattering, and paired with a great top and flats, they definitely don’t say “annoying American tourist” to me.

A pair of casual shorts certainly isn’t the typical application for suiting fabric, but sometimes it pays to think outside the box 🙂

Now I tend to go straight for the suitings section when I’m looking for a drapier bottomweight fabric.  My favorite suitings are rayon or wool crepe, though many have some polyester content as well.  That used to be a big turn-off for me, but I’m developing a more open mind for particular applications 🙂  Particularly since suitings don’t require frequent washing, so long as I use them for garments that don’t heavily depend on the fabric’s breathability (for example, I wouldn’t make a summer maxi dress from poly blend suiting — it would be too hot), it usually meets my needs quite nicely! 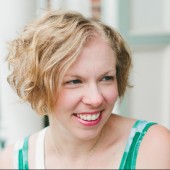 Hi, I'm Katie -- a lawyer, crafter and mom to three wonderful kiddos. During the day, my time is filled with research, briefs, and writing, toys and sports. But the evening hours are my own, and I fill those with fabric, sewing, and of course blogging!

So that's me -- the Creative Counselor, lawyer (and mom) by day, crafter by night!

4 thoughts on “Another look at suiting”

15 Tips for Sewing with Rayon Challis