I’ve been on the quest for the perfect [for me] me-made 1940’s jeans.  I haven’t quite hit my self-appointed mark, but I’m getting close!  For these jeans, I used a 1940’s wide leg trouser pattern (Simplicity 3688) and altered it to add pockets and a side button opening as well as a ton of contrast top-stitching.

I used the Robert Kaufman indigo selvedge denim which has red, blue and white on the selvedge.  Cali Fabrics always has a lot of selvedge denim in stock, so I all I had to do was pick some out!  Selvedge denim is a heavyweight non-stretch denim with a narrow (30-31″) width.  The most fun is finding ways to show the cool striped selvedge on the outside, or tiny peeks of it like in my pocket below.

What I really wanted to showcase with selvedge jeans was at the cuffs.  I made sure to cut the denim with the selvedge on the outside pant seam and give myself enough length to cuff them.

The inner leg doesn’t have the selvedge edge, so I serged each side of the seam.  I’ve also seen sewists use colored serger thread to mimic selvedge denim.

The most difficult part of sewing with selvedge denim is choosing a pattern.  Most jean patterns that I’ve looked at require stretch denim and as this denim is non-stretch, I chose a trouser pattern instead.  I had previously sewn this pattern, so I was aware how it fit.  It has really wide legs, which is accentuated by the stiff denim.

Selvedge denim has a narrow width, so you may have to purchase more of it make your pattern.  I measured out pattern pieces prior to ordering to ensure that I had enough to make these jeans and it took about 4 1/2 yards.  Granted, these jeans have very wide legs, so perhaps you could fit your pant pattern on a smaller piece of yardage.

It was really nice to sew with this denim, which left me wanting to sew more! I just used regular (Gutermann) polyester thread and a jeans needle (Schmetz).  I prewashed this fabric before sewing and didn’t have any of the dye rub off on me while I sewed.

I think it would be cool to make an unlined blazer with selvedge denim.  Instead of sewing bias tape to the seams, you could cut the pattern pieces where the selvedge will be on the edge of the seams.  Can you think of other ways to show the selvedge off? 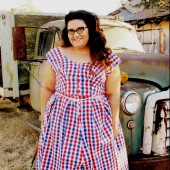 Tanya is a Northern California ranch girl in love with retro prints and vintage patterns with a bit of modern flair. When not battling with her cat over her sewing table, she likes to repurpose junk, throw frisbees for her dogs, immerse herself in history books and geek out over sci-fi and fantasy. You can find her at her other home on the web: Mrs. Hughes.

Back to the Basics – Chambray and Twill

12 Things I Learned While Sewing My First Denim Projects

Naughty or Nice? Getting Two Looks from One Pattern

6 thoughts on “Working With Selvedge Denim”

Leave a Reply to Linda of Nice dress! Thanks, I made it!! Cancel reply

15 Tips for Sewing with Rayon Challis